Debugging is twice as hard as writing the code in the first place. Therefore, if you write the code as cleverly as possible, you are, by definition, not smart enough to debug it.

Code which does a little bit of everything at once is hard to work with. Reasoning about a function which reads inputs, does math, calls a remote server and writes outputs in a tightly coupled bundle can easily become overwhelming: there’s too many moving pieces to keep in your head. Here, I show how you can spot tightly coupled code and iteratively improve it.

A code smell is an issue with the source code of a program that indicates there might be some larger underlying issue. For example 1:

Cyclomatic complexity is the number of linearly independent paths (e.g. branches of an if statement) in a function

When code has a lot of code smells, it can become brittle to the point of becoming hard or impossible to change. At that point, your productivity goes to zero. Such code is often deemed spaghetti code, code so tightly wound that when you pull on one strand, the entire thing unravels.

It is a sad fact that delicious, delicious carbs have such a negative connotation in programming circles. 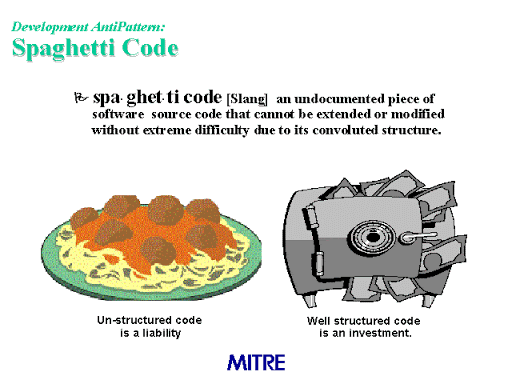 Fig. 9 Spaghetti code. From Brown et al. (1998), AntiPatterns. Notice the late 90’s clipart. Spaghetti code has been around for a long time¶

What does spaghetti code look like?¶

I wanted to find an example of real-life spaghetti code, without being mean-spirited. wave_clus is a piece of software that runs in Matlab which is very useful to neuroscientists, and which I’ve personally used and appreciated. It’s used to tease out signals from different neurons. Here’s an excerpt from real code from a function:

The fact that it’s Matlab code can help us to evaluate this code with a little bit of distance - a beginner’s mindset, if you will. We see many different code smells:

The problem with spaghetti code is not that it doesn’t work, is that it’s inscrutable and brittle.

Sometimes code is so brittle that it’s impossible to modify to run on a modern system. This is why every lab has a machine running ancient software in a backroom somewhere with a sticky note written DO NOT UPGRADE.

Learn to identify and use pure functions¶

When novices are introduced to Python functions, they usually start with pure functions. Pure functions follow the canonical data flow:

For instance, this function which adds two numbers together follows the canonical data flow:

A stateless function doesn’t have persistent state that carries over from call to call. A function which uses a global has state.

This function is also deterministic, and stateless. This is the computational analogue of a mathematical function. You can think of them as unchanging black boxes: you put stuff in, computation happens, you get a result out, and neither the input or the black box gets changed. Because of this, pure functions are easy to reason about - they are the best kind of function. If something that you write makes sense as a pure function, write it that way.

Some languages enforce using pure functions: they are functional programming languages. Python, however, is a multi-paradigm programming language: you can write functional code, object-oriented code, imperative code, and mix and match as desired. While this flexibility allows us to use the right tool for each job, it offers numerous possibilities to shoot yourself in the foot.

Much Python code uses non-pure functions with side effects, which can be hard to reason about. A side effect is anything that happens outside the canonical data flow from arguments to return, including:

For instance, consider this function which reverses a list:

You can reverse a list directly with arr[::-1], but we don’t use this primitive here for the sake of illustration.

This function has a side effect: it modifies its argument arr. In Python and many other languages, arguments of complex types like lists, dictionaries and objects are passed by reference, which means they can be modified by the function. That breaks the normal data flow - the arguments are also returns!

In the base Python library, a function which modifies its argument returns None. For instance, the function sort sorts its input argument, modifies it in place, and returns None. This function has a side effect, but it’s obvious: if a function returns None, yet does useful work, it must have a side effect. When we both modify an argument and return it, we break this convention and confuse the Python reader. We can fix this by returning None in our function (good), or returning an entirely new list (better):

Functions with side effects can be hard to reason about: you often need to understand their internals and state in order to use them properly. They’re also harder to test. Not every function with side effects is problematic, however. My pragmatic advice is to first learn to spot and understand pure functions. Then organize your code so that many functions are pure, and those that are not are well-behaved.

Fig. 10 Shrinking the amount of impure functions in your code will make it easier to reason about. Graphic inspired by CodeRefinery.¶

If it ain’t broke, fix it till it is.

Sometimes, code smells come from a lack of knowledge about the language. Reading other people’s code, pair programming, and reading programming books can help fine tune your knowledge of a programming language and get out of this local minimum.

Move away from Matlab idioms¶

Using magic columns numbers to index into a numpy array. Matlab has a matrix type that it uses for many things. You might use the tenth column of a matrix to store a timestamp, which creates hard-to-read code. Dataframes are more appropriate to store parallel data. In 3 months from now, A.timestamp will be far clearer than A[:, 10]. You can learn the basics of pandas in a weekend, and it’s a great time investment.

Using bespoke casting for string formatting. Python has a great string formatting method since version 3.6: the f-string. Generating a file name for a checkpoint with f"{model_name}_{iteration}.pkl" is more intuitive and readable than model_name + '_' + str(iteration) + '.pkl'.

Avoiding for loops. You may have been taught to avoid for loops as much as possible in Matlab by vectorizing everything. However, this often sacrifices readability. Tricky indexing may look clever, but can be next to impossible to debug. Because Python has a different performance profile than Matlab, some Matlab-specific optimizations won’t make your code faster. For instance, unlike Matlab vectors, Python lists are very cheap to grow. Appending to a list in a for loop and then turning that list into a numpy array in a single call has little performance overhead compared to preallocating.

To be clear, modern Matlab doesn’t have to be written this way: for instance, Matlab has a capable dataframe class. But a lot of people that come from Matlab still use old Matlab idioms. I have three more tutorials for you if you come from a Matlab background to ease your transition [1] [2] [3].

Let’s introduce a small-scale example that we will make progressively better. We want to write a function which does three things:

Can you spot the code smells in the previous code?

count_words is now a pure function - it takes in a string and returns a dict, and it has no side effects. This isolation can make it a little easier to notice bugs in the function. Indeed, if we run the code on a few test strings, we notice that this function does not work as expected.

We have an off-by-one error in counts, and we are also not correctly dealing with newline characters. Let’s fix this.

Not only have we improved the legibility of the code, we have improved its correctness.

Decrease the amount of nesting¶

Our code has too many levels of nesting. One underlying cause is that we have two branches for when a key of dictionary exists and when it doesn’t. Python has a collection in its standard library specifically built to deal with this: collections.defaultdict.

collections.defaultdict(int) creates a dict with a default integer value of 0.

The other level of nesting is due to detecting empty words, w != ''. We can decrease the nesting of the counting code by skipping to the next iteration upon encountering an empty word:

However, the root of the problem is that there can be multiple space characters next to each other - this creates empty words. One solution is to replace multiple spaces with one space. With regular expressions, this can be done in one line:

re.sub(r"\s+", " ", ...) finds one or more instances of consecutive whitespace characters (including spaces, newlines and tabs), and replaces them with exactly one space. You could argue that this is less readable than the original version. Regular expressions can certainly be cryptic. However, from a feature perspective, this is an improvement because it deals with tabs and newlines properly.

Improving code will require us to make many judgement calls like this. Should we prefer features over cleanliness of code? There’s no one true solution!

We can improve legibility further by using descriptive names and using f-strings. The finalized code can be compared with the old code side-by-side.

It’s not perfect, but it’s an improvement over the original in terms of legibility, correctness and feature set.

Decoupled code is something we all strive towards. Yet, code often has a natural tendency to become more and more tightly wound over time until it becomes an unmanageable mess. The strategies in this chapter will help you to identify code smells and correct them.

Pure functions are easier to reason about, because they’re stateless - that saves your working memory when you’re reading code. Code that follows Python’s idioms is also easier on your working memory: when you see a line of code that is a familiar pattern, you can see the entire line as one chunk rather than multiple disparate bits. That takes one working memory slot rather than several.

Changing existing code is not without its dangers, however. Perhaps we will make a mistake and introduce a bug in our code! How can we check that our improved code still does the correct thing? We’ll cover this in the next chapter on testing.

Take a long function in a script you currently are working on, and split it in two. What challenges did you face?

Many of these and more are mentioned in the Wikipedia article on code smells.

Python doesn’t restrict outside access to private class variables; it’s just a convention to use _ as a prefix.